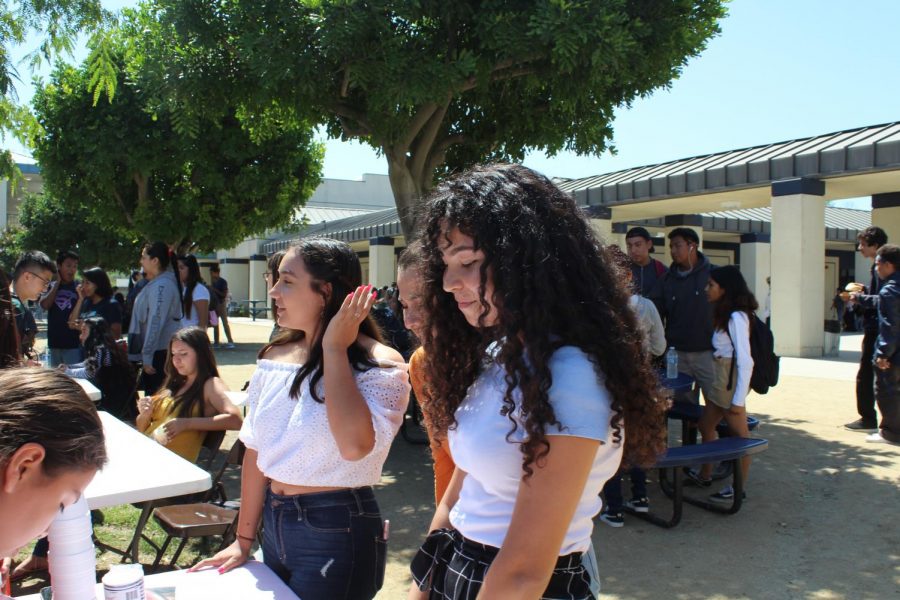 On September 12, South El Monte High School hosted its annual club rush.  A significant amount of club advisors and members prepared to highlight their best club attributes which reflected the importance of the day to the social aspect of high school. This event introduced South’s newest students and freshmen to the clubs our school offers, as well as revealed newly formed clubs to returning students.

South El Monte High provides a large array of clubs, whether it be academic or hobby-based. Some hobbyist clubs include Anime, Cosmetology, and K-Pop.  On the more academic side of the spectrum, there are CSF, FBLA, and SeaPerch. No matter how different the clubs may seem, they are all kept running by the passion of the students who want to bring their interests to the school.

The club members had to be dismissed from their fourth period class early to set up their tables and poster boards so that when the lunch bell rang all the tables would be up and ready. Many clubs were formed quickly so students had to be prepared for what was thrown their way.

Dillon Williams, the ASB Freshman President, stated  “Club Rush allows many students to join clubs and give them a better view on what they want to do or what they think they want to do and it helps them in college. I joined Drama Club, FBLA, and Emerald Jewel. ”

Regardless of what challenges come their way, students always persevere during Club Rush. With the pressure of it being the start of school and wanting plenty of students to join their club, club members try their hardest to capture the attention of students with colorful table covers, eye-catching poster boards, and delicious snacks. Some of the more noticeable clubs were FBLA, with a giant spinning wheel, the LGBTQ+ club, with rainbow banners and cute stickers, and MECHA’s hyped members and club advisor.

“Club Rush showcases how diverse the clubs that South has that anyone knows they can be a part of, especially if a student is new. The students need to be aware of what clubs are available on campus, and they might learn a little more about themselves. I hope that the most important thing we showcased was how open we are to new people. We always want to be welcoming so that people will be willing to join and enjoy FBLA,” says senior, Nicole Nguyen, an FBLA officer.

Every year clubs strive to expand their club by recruiting more members who are eager to be involved. Naturally there are challenges when trying to persuade students to join, some students may not seem to care about clubs, and only sign in as a joke. Club members need to be prepared to explain what their club wishes to accomplish in order to ensure that they get the club’s aim across.

“A lot of people registered but that doesn’t matter. What matters is getting the name of your club out there and providing information to those interested. Something that could be improved during club rush is the information that is required to be put down on the signup sheets,” states Cassandra Flores, the Cosmetology Club President. And she continues to suggest, “More things like having to write down your email should be required so that presidents of clubs could have an easier time contacting those who signed up.”

Some factors club members wished could have been avoided was the heat. Many clubs that wanted to get the best spot to place their stands had to rush to gather their materials and find a shady area to set up. The rest of the students made do with the sun, although many possible new members preferred to stay near the cooler areas of the quad.

Ultimately Club Rush was a success. This is evident in the clubs’ follow-up meetings where membership had increased significantly and highlights the welcoming aspect of South.