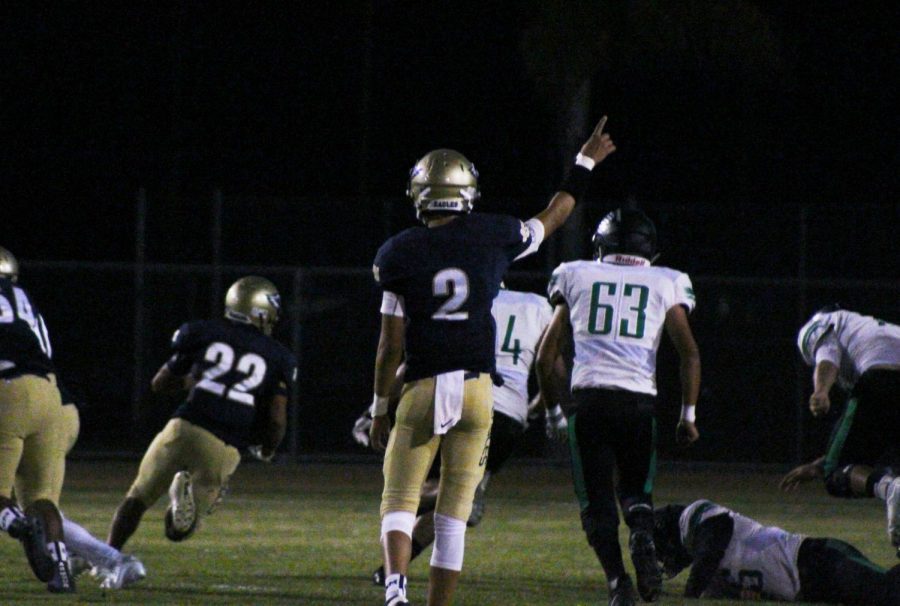 On September 6, 2019, South El Monte hosted the Nogales Nobles and honored three new inductees during their second annual Hall of Fame ceremony. The South El Monte Football Hall of Fame inducted defensive back and wide receiver Art Carmona Class of ‘97, Quarterback Dr. Jose Garay Class of ‘08, and Coach Bill Thompson ‘92-’96.  After opening the season with a tough 0-2 start, the Eagles looked to end that slide in front of some very significant viewers who knew a thing or two about winning.

The Eagles came out strong, establishing their run game early and often which featured a heavy dose of sophomore Running Back, Ryan Gordiano (#22), and also featured junior Quarterback, Mario Zamudio III, (#2). After getting into scoring position, Zamudio finished off the first quarter drive with a 5 yard touchdown run putting the Eagles ahead 6-0. Unable to make  the point after attempt, the offense had to settle for just 6 in their first scoring drive of the night.

The junior Quarterback’s scoring prowess continued in the 2nd quarter and increased South El Monte’s lead with an 8 yard touchdown along with a two-point conversion to make it 14-0.  Gordiano was carrying the ball more often than not, racking up yardage on each carry and helping the team get down the field. The Eagles were solid on the defensive side of the ball as well, not allowing Nogales to any points in the first and second quarter.

After a good first half of football played by the Eagles, the attention turned to the Hall of Fame ceremony. As the 2018 inductees, Mr. Escamilla and Mr. Rosales shared with the audience the impact that Art Carmona, Dr. Garay, and Coach Thompson had on the football program here at SEMHS. The three men talked with friends and family taking in the moment and soaking in the recognition they were receiving. They took pictures as well, holding up their golden hall of fame placard with their names, roles, and achievements during their years here.

Dr. Garay was named All Mission Valley League Quarterback for 2006, 2007, and 2008 and All CIF Quarterback in 2007. With such achievments one would assume that’s all an athlete cared for, however, Garay humbly stated, “What really motivated me were the guys on the field with me every friday night and I never wanted to let them down”.

Thompson was the very first Head Coach for South El Monte football from 1992 through 1996 and he helped lay the groundwork for the program. As an integral piece to the start of the SEMHS football program, Thompson recited a poem for all Hall of Fame inductees, past and future, “Heroes all, their names installed, on the waxed wall, within the hollowed wood Hall of Fame”.

After the halftime ceremony, the Eagles success carried over into the second half of the ball game. Firing on all cylinders, the run game was tough to stop with Gordiano leading the way at running back. The Eagles offensive line was gritty, moving defenders and opening up running lanes for the ball carrier. Zamudio found himself in the endzone once again at the end of a three yard run for his third rushing touchdown of the game. Following the point after attempt, the score was 21-0, and the defense was not letting up, allowing zero productivity from the opposing offense.

The Nobles didn’t score their first points of the game until the 4th quarter, and it came off of an unfortunate interception for a touchdown. On the ensuing drive it was back to normal with a 4th Zamudio rushing touchdown, this one being another 5 yard run. The score now 27-7, our boys looked to put the game away, and so they did with help from Gordiano, who broke off a 40 yard run capping up the scoring efforts for South El Monte. With a final  score of 33-7, the victorious home team’s hard work and dedication earned them their first win.