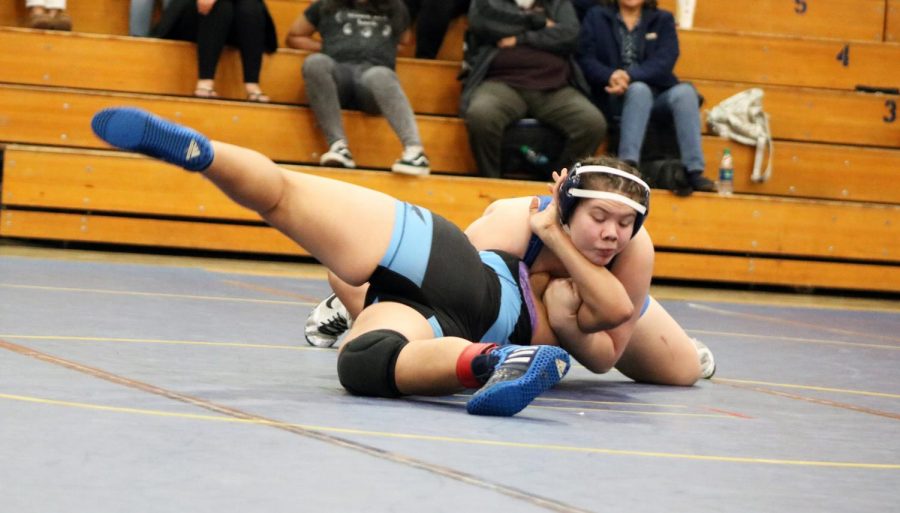 On Thursday January 16 students, faculty, and friends gathered for senior night in the gym. The stands were decorated with balloons, posters, and loving spectators. “At first, I thought it was going to be a small announcement as usual. But then I was so shocked and excited when we had escorts and small speeches for everyone. It was amazing and at that moment, I was so happy,” says Cielo Portillo. The crowd applauded as the drill team cheered on the athletes. Coaches handed out their medals with flowers while one parent gave students personalized singlets, boxes, and bags.

Senior Cielo Portillo gives insight through her wrestling journey at South El Monte by sharing her love of the sport and talking about her team. What some may not know is that these athletes go under extreme training to make sure they meet a certain weight class. In this game, the Eagles faced the Rosemead Panthers in a head to head match.

Senior Brenda Gonzalez faced a challenging match against her Rosemead opponent. During the first round of the match, we saw Gonzalez from South and Martinez from Rosemead High struggling to bring each other down. Eventually, Gonzalez is able to bring Martinez down but is stopped because their time is up. Teammates and supporters began cheering for Brenda during the second round. The match began quickly and soon enough Gonzalez had Martinez on the ground again. Both girls were on the floor at this point and Martinez was struggling to get Brenda off the mat. However, Brenda was determined to not give up and she was able to pin Martinez. Brenda conquered her opponent by a pin to finish the match.

Cielo shares “ It’s amazing to see how far I’ve come starting my freshman year, taking a break, and coming back a senior year. I’m going to miss everyone.” She advises incoming freshmen and returning students to stay committed all throughout and be supportive to everyone around. Portillo hopes that South can continue a great program and take more league titles in the future.

Each of the underclassmen is excited for their older teammates to graduate and do great things in life. The seniors are grateful for the coaches and their immense support. On this night South El Monte triumphed over Rosemead, senior leaders Cielo Portillo and Brenda Gonzalez are optimistic that the future of SEMHS Girls Wrestling is a bright one.