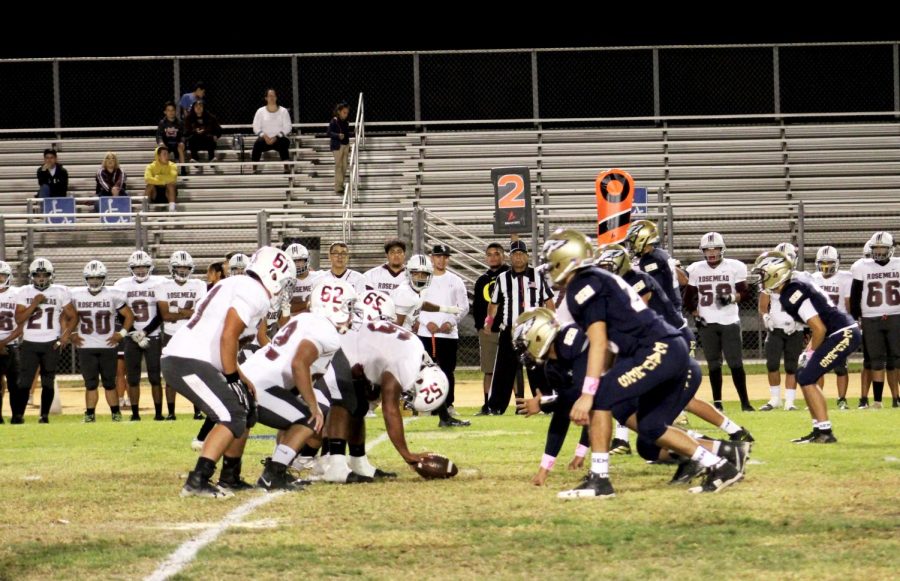 On October 11, 2019 South El Monte High School was buzzing with excitement with the homecoming dance just one night away, and our boys’ football team ready to take on Rosemead High School on the gridiron. As the home crowd settled in, the festivities were just beginning as junior Josh Flores, performed the Star-Spangled Banner on his electric guitar. The Eagles were coming into this game off the heels of a road defeat to Gabrielino High School in the league season opener and were motivated to capture their first win of the season. The camaraderie of Homecoming and the desire to win was apparent in the Eagles performance.

In the first quarter points came at a premium as only one touchdown was scored by both teams. Fortunately our boys were on the right side of that touchdown taking an early 7-0 lead provided by running back Ryan Gordiano on a quick 1-yard run. The score remained the same for the entirety of the 1st quarter.

The start of the 2nd quarter continued the slow pace of the game until a second Gordiano touchdown run, this time a distance of 22 yards. Rosemead was able to put points on the board with a touchdown pass making the score 14-7. Going into halftime with a close score, the crowd was in for a good game and an eventful halftime parade.

As the events concluded, both teams took the field with Rosemead looking to even the score, and our Eagles aiming to extend their lead. Our boys were quick to do so as they scored on a 33-yard touchdown pass from quarterback Mario Zamudio to wide receiver Chris Tirado, extending the lead 21-7. The Eagles were able to complete a 20-yard field goal later on in the 3rd quarter, but the following drive Rosemead scored on an 11-yard touchdown pass to make the score 24-14. Andrew Munoz took off for a 53-yard touchdown run, putting the Eagles ahead 38-14 finishing off an action-packed 3rd quarter.

The 4th quarter began with another Zamudio to Tirado passing touchdown, this time for 47 yards. More Eagles rushing touchdowns came in their following possessions from both Gordiano and Munoz, breaking the lead wide open to 51-14. Prior to the conclusion of the game, Rosemead got into the endzone with a 53-yard touchdown pass to make the final score 51-21.

The Homecoming game was a success, as the Eagle’s won convincingly. They performed well and left the game with their first league win, as both the run and pass game were very alive. The Eagles offense was propelled by key performances from running backs Ryan Gordiano and Andrew Munoz who combined for 362 yards rushing and 5 touchdowns, along with quarterback Mario Zamudio and wide receiver Chris Tirado who connected for 2 touchdowns and 80 yards through the air.